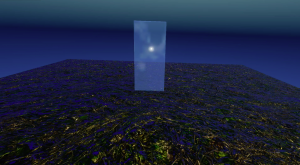 New Maps of Hyperspace_Test_01 explores a post-human environment where several abandoned experiments to sustain life: beehives in incubators, 3D models of bodies, plant and insect colonies lie empty. The work is set in a liminal time when humans have vacated the world.

Stepping through a portal, the viewer encounters a circular ball that acts as a narrator and leads them through a surreal colour saturated simulacra of an urban landscape that encompasses a water basin surrounded by architectural remnants of a derelict laboratory and data center. The residues of pre-human consciousness have remained trapped in computers in the data center, uploaded before climate disaster destroyed life. As the viewer explores the interior of these abandoned buildings it is revealed that they contain evidence of experiments that suggest machines are attempting to re-introduce life back on earth. The work is a parable on Alan Turing’s technological disembodiment, Terrence McKenna’s“hyperspace”and an undoing of the matter of consciousness. The work dwells on systems theory, climate care, digital consciousness and data mining.