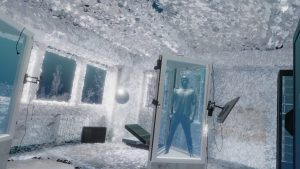 In preparation for their presentation as part of the Berlin Program for Artists at Gropius Studios, Doireann O’Malley has been leading workshops as research for an ongoing virtual reality and performance project: Hyperbodies in Hyperspace. As in previous works, they continue to expand on experiments with collaborative methodologies such as schizoanalysis while introducing movement and therapeutic workshops in order to build characters, content and dramaturgy. The work poses a series of questions regarding our role in what has become the everyday performance of platform capitalism-as-confessional. It also draws on a shift from embodied experience to an unprecedented entanglement with disembodied floating simulacra or avatars. How does a work that is ostensibly AFK (away from the keyboard), and by extension deeply enmeshed in the online world, perform this shift to the digital? To what extent is the production of subjectivity and bodily representation determined by an online corporate environment designed solely for the purposes of data extraction and profit imperatives? How can representational systems like virtual and augmented reality be used for alternative narratives that eclipse corporate ideology and reinstate agency and the complexity that arises from it?

Hyperbodies in Hyperspace builds an alternative narrative structure based on the premise that the digital has become an extension of our memory and experience. Through this symbiosis, memory becomes glitched and these unforeseen glitches offer an opening to portals of experience yet to be shaped by platform capitalism. Glitched memory thus becomes fragmentary streams of consciousness arising during the waking life of five characters played by Juan-Carlos Cuadrado, Mathea Magdalena, Cian McConn, Elena Schmidt and Sarah Seini. Their dream-like thoughts are exteriorised as hallucination through a series of monologues and scenes set in a post-human environment in which an unspecified disaster has unfolded. An earlier work, the VR piece New Maps of Hyperspace_Test_01 (2020) foregrounds much of this narrative and serves as a technological prop that the performers interact with as part of the performance.

The reality captured by this performance is not dissimilar to the one in which we now find ourselves. Existential daily dalliances with unseen miasma of virus have transformed our lives. Technological symbiosis is becoming more entrenched as we bear witness to the abrupt cancellation of the future AFK. More often than not we find ourselves sitting alone in rooms locked into screens. Imagining a future self calls for a dreaming of the kind Terence McKenna evokes in his essay New Maps of Hyperspace (1989) and from which this work formed the research. For McKenna the dream is “zero time” and “outside of history.” It is analogous to the speculative experience of hyperspace, a sci-fi term given to the space-time continuum in which it is possible to travel faster than light. In both states, time appears to stand still (Einstein’s theory of relativity tells us that the closer an object travels to the speed of light the slower time becomes). Dreaming can quickly turn to nightmare however, and the episodic repetition of history-as-nightmare can, at times, feel like farcical simulation. Finally this work touches on the yawning gaps between our wish for escape, human connection and approval — and our seemingly Sisyphean task of achieving any of it.